The media industry stands for creativity and a heavily interconnected network of freelancers. That's great for producing films, commercials, and music, but it makes organisation really hard. We founded a software as a service startup to revolutionize the way freelancers can be managed and crews booked.

It all started when my cofounders from Chicken Technologies and me tried to set up a few brainstorming sessions with external people. Even though tools like calendly and Doodle make things a lot easier, it’s still a massive pain to organize meetings or events with many people.

We dug a bit deeper into the world of scheduling and noticed the issue resonated a lot with people working in the film industry. Apparently, shoots are still organized by hand, meaning every freelancer is messaged separately and it takes producers and assistants hours and hours to get everything scheduled.

Having found a challenge that affected a lot of people and seemed to be solvable using software, we decided to turn this into a venture. We secured seed funding from the Media Lab Bayern and partnered with a film producer from Berlin to take the media industry to the next level. This is, heavily simplified, how callsheep started.

By the way: the name callsheep is a pun based on the word callsheet (the schedule for shoots containing shot lists, participants, and their contact information) and the sheep in the logo. Obviously, after Chicken Technologies, we had to use another animal in the name.

Before I tell you what we developed, let’s quickly go back to the status quo and why it is problematic. In small to medium-sized media production companies, crew planning goes as follows: The head of production gets a project assigned by a director and proceeds to put together a crew. Usually, they create an excel sheet and go through their contacts (partly in another excel, some on their phone, some just from memory) and add a list of possible candidates. Then, they reach out to the candidates (usually freelancers) to find out if they are available at the time in question. This usually ends in a lengthy back and forth until all information is exchanged (which only marginally differs between the freelancers of similar categories, e.g. camera people). The producer texts some freelancers on Whatsapp, some via email, and calls the rest. When there is feedback, they add it to their excel list and check it frequently to see if the crew is complete.

Sounds like a lot of time is wasted there, right? It is. Of course, there are some crew management tools out there, but they all have one major flaw: Everyone, meaning all freelancers a producer might want to book for a project, needs to have an account to receive the invitation. This means a company has to onboard all their contacts, which - in the creative industry - is almost impossible. The result: Excel and manual booking is still the most popular way to manage crews (at least on the German market).

Enough about the problem - how did approach solving it? If you speak German, here’s our marketing video that explains the basics:

If you don’t, here’s a summary: We aim to cut out all time-consuming processes, from searching your contacts in different excel sheets to sending the same invite message to everyone manually and having to wait for everyone’s reply to come in, tracking when to invite additional candidates manually. How? Import your contacts into callsheep, select which roles you need for your next project, and assign your pre-sorted contacts. callsheep will then invite everyone automatically and track their replies - without them having to sign up! It all works via a button directly embedded into the email invites. If set to do so, callsheep will also automatically invite backup personnel once someone declines or their reply time limit passes. This leaves the producer with more time on their hands and always in control of the current state of crew planning. 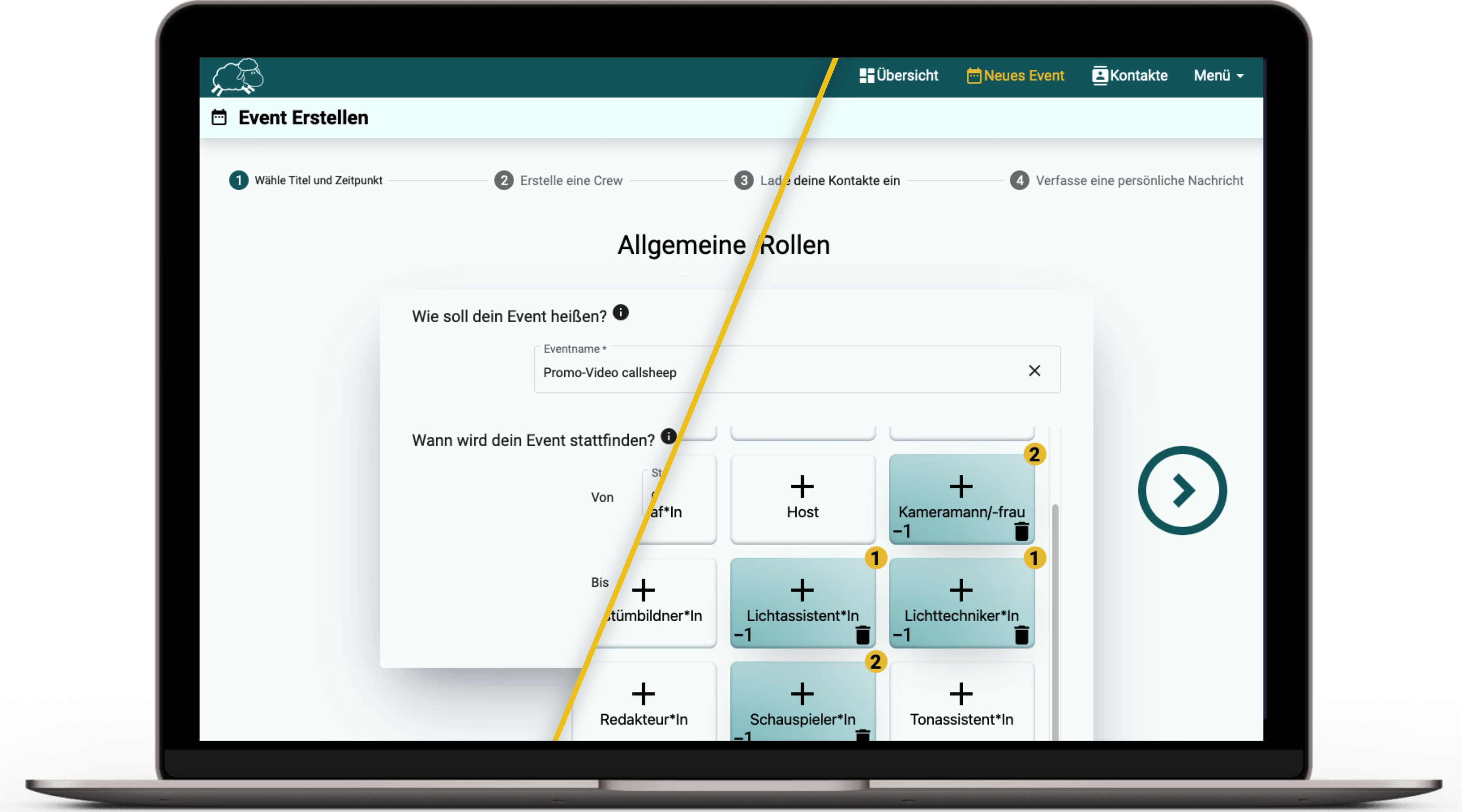 In the first two steps, the producer creates an event and selects the required roles. 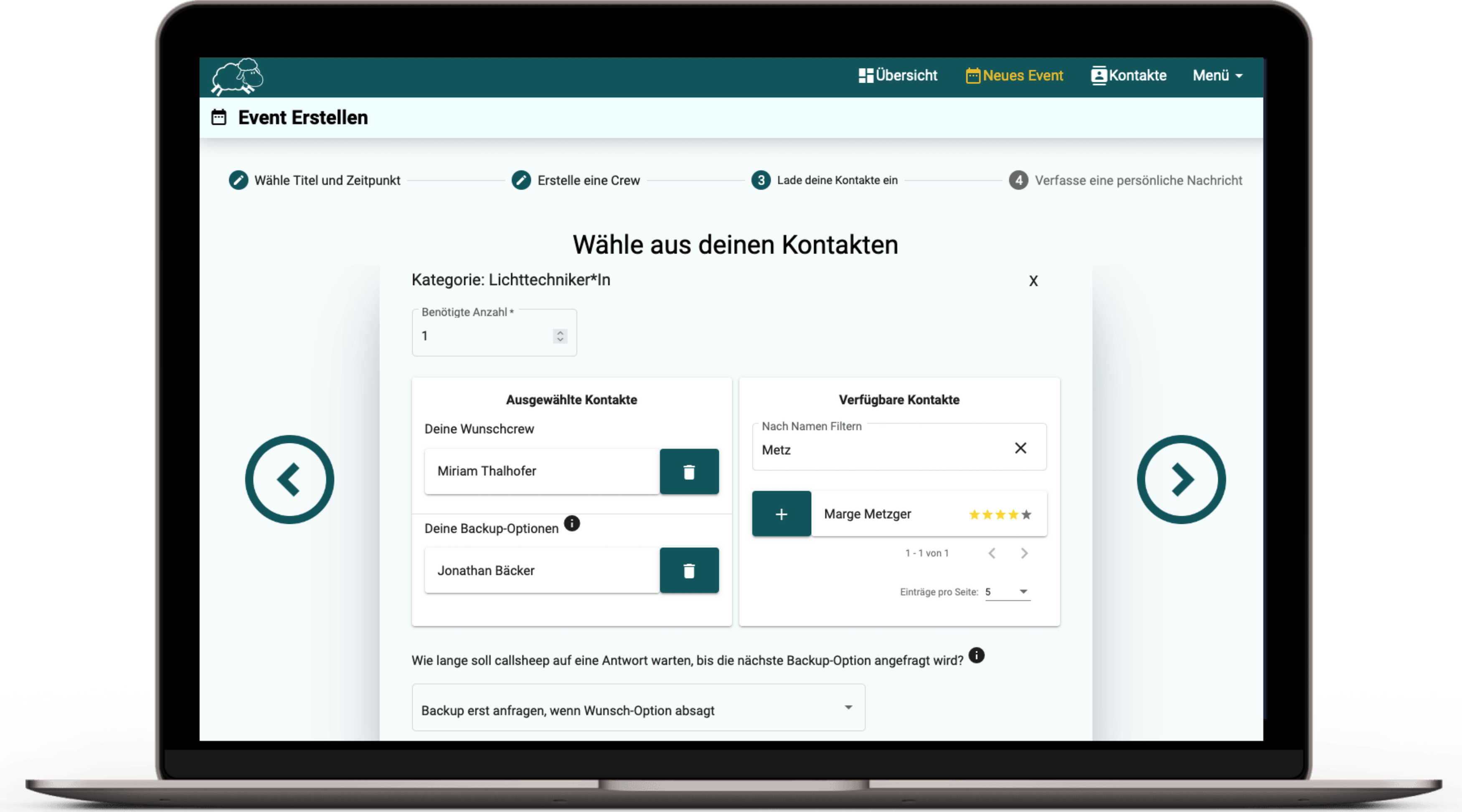 Next, for each role, contacts from their own contact book are suggested based on their skills and rating and can be assigned to the crew slot or as a backup option. To add contacts, producers can either create them directly in callsheep or upload excel files. This adds the additional benefit of having a contact management system on top, allowing to search for people, keep their information up-to-date and, if wanted, offer a central place for everyone in a company to access them.

In this step, the producer can also select whether to invite backup staff only after a first-priority crew member declines, or to set a time limit after which the next person is invited. Moreover, producers can modify a suggested invite message which, after confirmation of the producer, is automatically personalised and sent out to all freelancers in question.

Freelancers will now get the invite in their inbox and can use a button to get to a landing page containing all the information the producer shared about the project. There they also find an interface to accept or decline the invite or ask the producer for additional information - all without having to sign up. 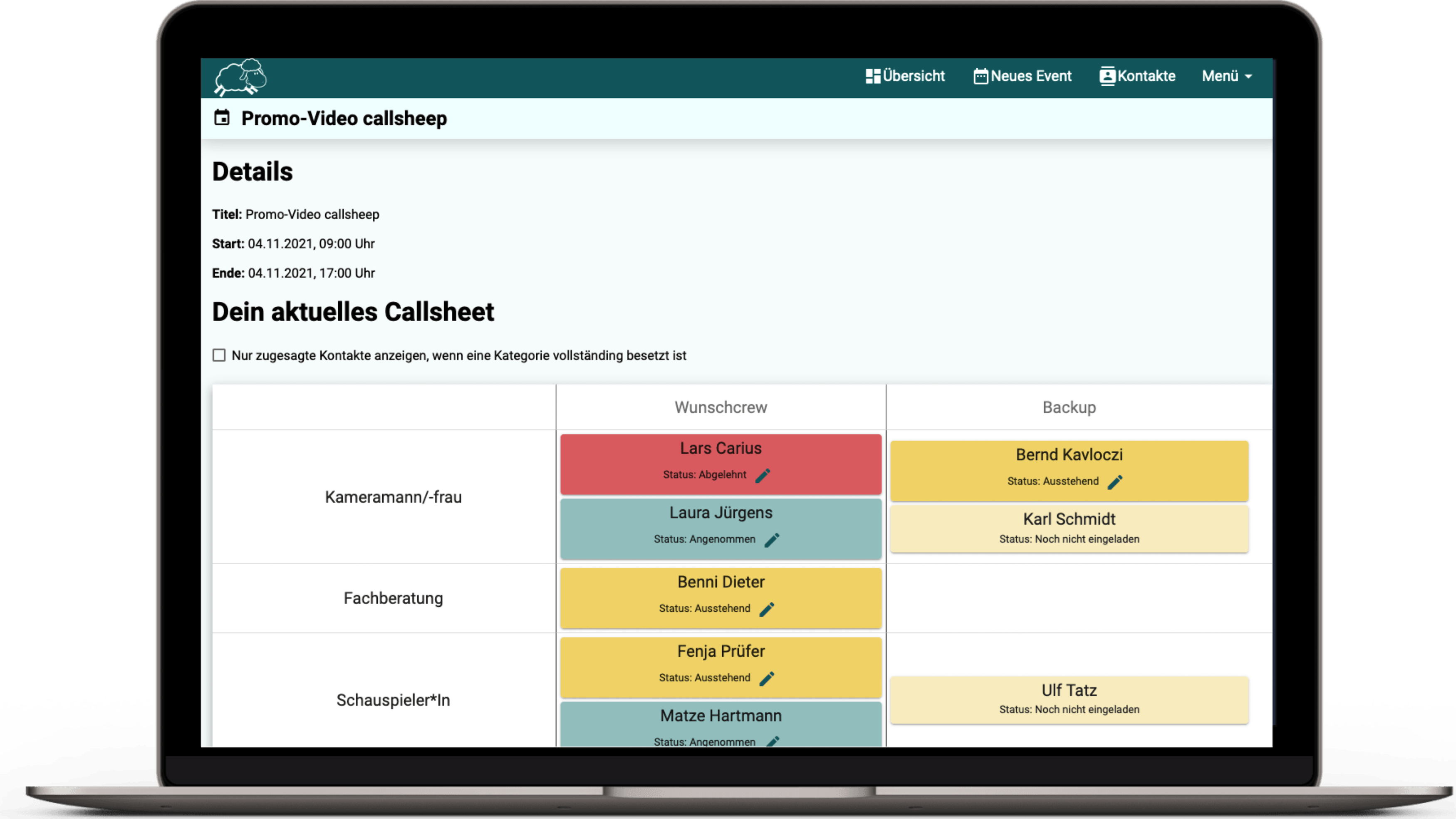 While replies come in, the producer’s dashboard gets updated in real-time, providing important information about the current status of the crew.

With this approach, we solve the core problem mentioned earlier and lay a solid foundation for both vertical (adding more features to digitalize the entire process of a media production) and horizontal (offering the same tool to neighboring industries like event planning) expansion of callsheep.

The tech stack we used to get to this point is the following: For the frontend, we used Angular. The backend runs a NodeJS+Express server that connects to our PostgreSQL database instances. To offer reliability and scalability, our entire architecture is containerized and runs on AWS infrastructure. Obviously, we use a range of services for billing, authentication, and other functionality, but let’s not go into detail too much. If you’re interested in learning more about the technical approach, just drop me a message.

callsheep is under constant development and is expanding its functionality to offer even more efficiency to media producers. If you are a producer yourself and want to try our tool, don’t hesitate to reach out or directly create a free account here. No credit card is required and it only takes a minute to get started.